“I sincerely hope that Activision-Blizzard can appreciate this tribute to these game franchises (as their original creators such as Al Lowe do), and not ask me to close down the site due to copyright issues.” Martin Kool, creator of Sarien.net, a website which allows in-browser emulation of classic Sierra adventure games

Walt Disney built his media empire by re-imagining characters, narratives and visual influences borrowed from the public domain, especially continental European fairy tales.  Disney’s earliest animated features Snow White and the Seven Dwarves (1937), Pinocchio (1940) and Fantasia (1940) rely on the German incarnation of ancient continental folklore, a piece of nineteenth century Italian children’s literature, and Greek mythology melded with classical music respectively.  However, it is not merely the public domain that was mined by Disney artists – Steamboat Willy (1928) was based on the then contemporary Buster Keaton movie Steamboat Bill Jr. (Jenkins 2003). Iconic Mickey Mouse himself (created 1928) is said to be highly derivative of Ignatz Mouse (created 1913) from George Herriman’s Krazy Kat comics (Heer 2003).

Contemporary intellectual property policy ensures that emerging “Walt Disneys” of the world are not able to access, borrow from and re-imagine the Disney corporation’s contributions to popular culture, including those examples based on materials in the public domain (Wiener 1994).

Sierra shares a similar history of building their products out of the shared stock of cultural artifacts found in public domain, as well as mining popular culture for conceptual influences that may be referenced as homage, pastiche or in parody. Coincidently, in the mid 1980s, Disney had Sierra develop several games based on their character properties and film licenses such as Donald Duck’s Playground (1984), The Black Cauldron (1986) and Mickey’s Space Adventure (1984), the latter of which was written by Sierra co-founder Roberta Williams.[1]

Williams spent much of the 1980s and 1990s writing, designing and producing the King’s Quest series of adventure games for personal computers.  Players of the KQ games controlled a member of the royal family of a fantasy world called Daventry as they navigated their way through a series of obstacles in order to save the kingdom, or a kidnapped family member, from some insidious evil (frequently brought about by dark wizards or witches).  Such story memes already conform to archetypes of the Western fantasy tradition, but the games truly find their strength in often clever re-imagining of folklore, mythology and public domain narratives.  Throughout the early KQ series, players encounter Rumpelstiltskin, Little Red Riding Hood, Goldilocks and the Three Bears, Snow White’s Seven Dwarves, and the gingerbread house from Hansel and Gretel, among others. Players must use their expected knowledge of these fables and stories to successfully play through their re-imaginings in the KQ universe.  Later KQ games borrow heavily from ancient Greek, Roman, Celtic and Arab-Persian mythology and feature Charon the boatman, Pandora’s box, the Minotaur, the Fates, a wish-granting genie in a lamp, as well as allusions to Shakespeare plays, Carrol’s Alice in Wonderland, the stories in One Thousand and One Nights, and the work of H.P. Lovecraft. 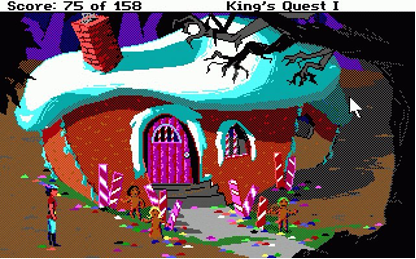 King’s Quest I: Quest for the Crown’s King Graham in front of a wicked witch’s gingerbread house, as inspired by the folktale of Hansel and Gretel as popularized in Grimm’s Fairytales. Image © 1990 Sierra Entertainment.

Running parallel with the development of the King’s Quest games was Sierra’s take on science fiction genre, the Space Quest (SQ) series, developed by game designers Scott Murphy and Mark Crowe.  Like KQ, the SQ games were a series of graphic-adventure games – however, unlike KQ, which owes much to folklore and public domain, SQ borrowed influence from modern (and protected) sci-fi staples, such as Star Trek, Star Wars, The Terminator and Alien as well as 1980s-to-mid-1990s pop culture in general.

SQ tended to present the conceptual influence of and borrowing of existing narratives and cultural references as homage and parody.  For instance, Star Trek’s James T. Kirk is reimagined as William Shatner-parody Raemes T. Quirk in Space Quest VI; the Alien series’ “face hugger” creature becomes a “pet” to SQ’s protagonist in SQV; and SQIII concludes with the player controlling a giant robot in an arena battle – clearly modeled on the Rock ‘Em Sock ‘Em Robots toys – against a robot piloted by the game’s chief antagonist, a caricature of Microsoft’s Bill Gates.  However, despite that under American copyright law such treatments are subject to the exceptions of fair use, the conceptual borrowing popular in the SQ games was subject to a number of lawsuits filed regarding the recreation of the likenesses of musical acts ZZ Top and the Blues Brothers without permission (“Room Removed”).

Sierra’s King’s Quest and Space Quest, like countless Disney creations and an increasingly large swath of intertextual pop cultural narratives (television shows Family Guy, Robot Chicken, etc.) are in many ways reliant on conceptual reinterpretation and alteration of existing artefacts and properties. Yet, for all the conceptual modding that went into creating these games, like that which went into the reimagining of fairy tales as Disney movies, there has been few opportunities for continued influence extended to non-professional modifications and extensions of Sierra artefacts and properties.

All the more disheartening to Sierra fans is that during these periods of fan interest in taking up and extending or altering these narratives, the KQ and SQ franchises were dormant, unexploited by their owners, left to (metaphorically) decay on the shelf like (according to Lessig 2004) hundreds of old films in the studio archives of Hollywood – despite that a small but rabid population exists that wants nothing more than to “play with” them.

Furthermore, Sierra’s influence on the creative pursuits of those who played their classic adventure games is evident not merely in the number and scope of fan made extensions and re-imaginings of those games, but also in examples like Adventure Quest, an off-Broadway play that debuted in New York in the summer of 2009.  Adventure Quest is both homage to and parody of gameplay elements and narratives of the King’s Quest and Space Quest games (Frushtick 2009).[2]

However, examples of conceptual influence are not always met with acceptance, as indicated by the boundaries of play imposed on The Silver Lining (TSL), a fan extension of the KQ series that promised to be of professional quality.  TSL, which has been in development since 2002, has faced two cease and desist notices from the corporate owner’s of Sierra’s intellectual property, most recently by Activision-Blizzard.  Perhaps most disheartening for those who want to see the KQ narrative continued in TSL is the lack of interest Activision-Blizzard has shown defending its KQ intellectual property in other modified forms, even structural alterations of actual code.

Case in point is Sarien.net.  Launched in 2009 by Dutch programmer Martin Kool, Sarien touts itself as a “portal for reliving classic Sierra On-Line adventure games… to win gamers’ hearts and promote the adventure game genre” (Kool 2009: np).[3]  Kool developed a way for several of Sierra’s most famous games published in the mid 1980s, including the original King’s Quest and Space Quest titles, to run in an internet web browser via his custom code interpreter.  Players can play through entire games, unaltered in terms of content or visuals, simply by visiting the website in a javascript enabled browser.  However, each game’s underlying code has been altered to feature new control and administration options (for things like saving your progress), and, most startlingly, online multiplayer functionality.  If they choose, users can see and talk to other players working through the same game at the same time, making the experience of these traditionally single-player games somewhat MMO like.

As of May 2010, Sarien.net features nine fully playable Sierra games, with plans to add more titles and more features to the site.  It has received no cease and desist orders or warnings from Activision Blizzard, despite that it is undoubtedly marks both direct copyright infringement (in terms of the reproduction of code) and unauthorized access to and modification of Sierra’s code and the expressive content therein, and has been in operation, unhindered, for more than a year.  In the year since Sarien’s launch, Activision- Blizzard has even made King’s Quest and Space Quest games available for sale on digital download sites like Steam and Good Old Games, reintroducing these products to market, despite that the official releases use unaltered, original code that can lead to limited functionality with newer operation systems like Windows 7 and thus run more poorly than the freely available, browser-based versions found on Sarien that could potentially undercut the profitability of the new releases…

Outside of profit motive, the logic that governs reaction to mods of conceptual influence is at times contradictory even for producers erecting the boundaries.  A notable example of this is The Silver Lining, a fan-developed extension of Sierra Online’s long-dormant King’s Quest series.  Over the past decade, the TSL project has been “foxed,” then granted permission to continue, only to be “foxed” again – an erratic pattern that denies Sierra’s history of cultural appropriation and conceptual influence in their games.  TSL’s challenges also defy economic reason since the current owner of Sierra’s IP has ignored other high profile copyright infringements of the same game properties that allow free, playable access to early Sierra games within a web browser, despite that these games are still for sale.  Things appear to be different where discernable economic value can be derived from user activity, as machinima examples like Red vs. Blue, as fostered by Microsoft, make clear…

[1] Al Lowe, a Sierra designer, has made Donald Duck’s Playground (1984) and The Black Cauldron (1986) freely available on his website: http://www.allowe.com/More/download.htm

[2] This is not the first instance of a theatrical performance of a digital game property.  YouTube features videos of amateur stage productions of Super Mario Bros.  Professionally, Capcom’s courtroom drama game series Phoenix Wright: Ace Attorney has been turned into a stage musical by the Takarazuka Revue, an all female Japanese theatre group (Ashcraft 2009).

[3] The title “Sarien” is borrowed from Sierra’s Space Quest franchise.  Sariens are the antagonists encountered in the first few titles of the series.