This tag is associated with 4 posts 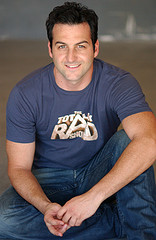 Jeff Cannata might be the hardest working man in popular culture.  Besides being an actor and improv performer, Cannata is a movie reviewer, alongside Miri Jedeikin, for Greedy Productions’ Reviews on the Run.  On internet network Revision3, he is one of the co-hosts of The Totally Rad Show (TRS), a creative exploration of all things good and bad offered by the popular media environment.  If that wasn’t enough, he is part of the regular cast of Shacknews’ Weekend Confirmed gaming podcast.

Such a description might seem to put Cannata into a ‘Jack of all trades, master of none’ situation, but there is no doubt that he knows video games – which he started reviewing professionally as a teenager – and there is no doubt he has insights to offer about the cultural significance of games and their players.

Jeff Cannata sat down with Play Till Doomsday to talk about gaming culture at Fan Expo 2010 in Toronto.  With help from Comics and Gaming Monthly’s Eric Weiss, we discussed the cultural significance of shows like Fan Expo, what Scott Pilgrim suggests about the current influence of geek culture and the challenges faced by producers trying to monetize online media content, among other topics.

END_OF_DOCUMENT_TOKEN_TO_BE_REPLACED

How the politics of gender intersect with cultures of video gaming is something that the Play Till Doomsday project is dedicated to addressing.  This is the first in a series of features that aim to elicit perspectives on gender issues that exist within the contemporary mediascape surrounding digital games from girls and women who make, study, play, or report on games.

Of course, this topic has not gone unaddressed in academic spaces, as the wonderful work of Brenda Laurel, Mary Flanagan, Suzanne de Castell and numerous others attests, nor gone ignored in more popular spaces thanks to efforts of writers like Leigh Alexander, sites like WomenGamers.com and organizations like Woman in Games International.

However, it is undeniable that the spaces of gaming culture are not always welcoming and tolerant toward women and girls.  This reality is apparent in mainstream game designs that still feature frequently sexualized female stereotypes, the under-representation of women as playable characters, and continued usage of archaic damsel in distress archetypes.  Outside these design contentions, the place of women in gaming is also challenged, as highlighted by recent news stories about the limited role of women in game development and the all too recurrent rejection of female voices and judgements within enthusiast games media.

END_OF_DOCUMENT_TOKEN_TO_BE_REPLACED

I spoke with Ian Kelso on Sunday, August 29 at Fan Expo 2010, shortly after he was featured as part of a panel addressing the state of the local games industry in Toronto.  Ian is president and CEO of Interactive Ontario, an interactive media industry trade organization dedicated to fostering the growth and prosperity of digital content creators within Ontario.  We discuss here the role and mandate of Interactive Ontario, government funding opportunities for interactive media creation, digital games as cultural products, the state of games at Fan Expo and industry events like it and how changing models of digital content creation and distribution may encourage more social acceptance of video games as forms of cultural expression.

Brady Curlew (BC): Can you please introduce yourself, your organization and its mandate.

Ian Kelso (IK): My name is Ian Kelso, I’m the president and CEO of Interactive Ontario, which is an association of 250 companies in Ontario working in interactive entertainment, creating intellectual property for digital platforms.  These companies make not only video games but also mobile media, online media and e-Learning products.

In terms of our mandate, Interactive Ontario is a non-profit organization and our purpose is to primarily serve our members.  Our membership is made up of all growth companies, so a lot of what we are concentrating on is finding ways of accessing public-sector and private-sector financing for them, and we work a lot with the government on programs and tax credits but we’re also trying to train investors and venture capitalists about the industry.  We’re also involved with cultivating talent and making sure our schools and universities are putting out the right kind of talent for the industry.  Those are the two main functions – we do some marketing, working with the Interactive Ontario brand, going to different markets and shows around the world.

END_OF_DOCUMENT_TOKEN_TO_BE_REPLACED

Welcome to Play Till Doomsday! This is the blog portion of transmedia initiative to accessibly explore digital games, gamers and the cultures to which they belong.

What better way to kick start an initiative exploring games, play and culture in Canada than with coverage of Toronto’s Fan Expo, a massive, multifaceted celebration of pop culture geekdom.  Admittedly, the presence of games at the 2010 show was sparse when compared to the attention given to comics, sci-fi and horror, especially in terms of panel discussions.  However, Fan Expo’s gaming focus did feature booths by Microsoft, Sony, Nintendo and Ubisoft, a heavy G4tv and Greedy Productions presence, and appearances by Victor Lucas of Electric Playground, Jeff Cannata of the Totally Rad Show, Felicia Day of The Guild, and Tommy Tallarico of Video Games Live, among others.

Add to this some board and tabletop game representation, a chance to try out indie games made by the talented members of Toronto’s Hand Eye Society, as well as the most Zelda cosplay you’ll see in one place north of border, and Fan Expo provides a stellar and multidimensional expression of gaming culture in Canada.

Play Till Doomsday is using Fan Expo 2010, as well as the upcoming IN 10 conference, to network with cultural participants, industry insiders and media personalities, all with the goal of launching this digital games, play and culture initiative with the strongest content and support possible.

Expect interviews and features from content amassed at both events to appear here in the coming days and weeks, and visit the about page to learn more about Play Till Doomsday.