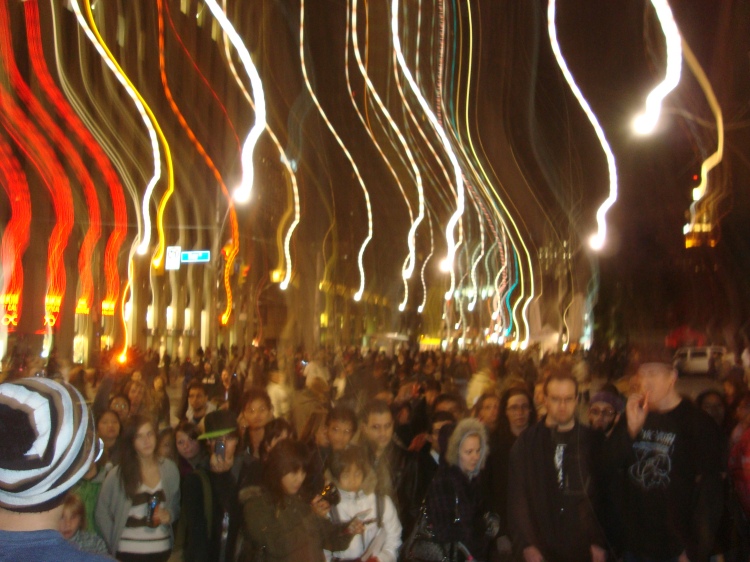 Digital games were the focus of at least two Toronto Nuit Blanche events I took in this past weekend, both testament to the cultural reach of games and significance of classic gaming hardware.

Just in front of Old City Hall, a collective of young chiptune artists called the Game Boy Guerrilla’s staged a chiptune “mega show,” featuring nine local acts including bossFYTE, jefftheworld and DJ Eastern Blok.  Chiptune music, for the unfamiliar, is made by using modified game hardware as synthesizers, taking advantage of the unique audio possibilities offered by the sound chips of classic game systems such as the NES, Atari 2600 and Game Boy, among others.

During the mega show sets, the repurposed blips and bleeps of cherished 8-bit video games were more than enough to stoke the interests of Nuit Blanchers, poaching much attention from the thousands of people checking out the Daniel Lanois Later That Night At The Drive-In soundscape next door. 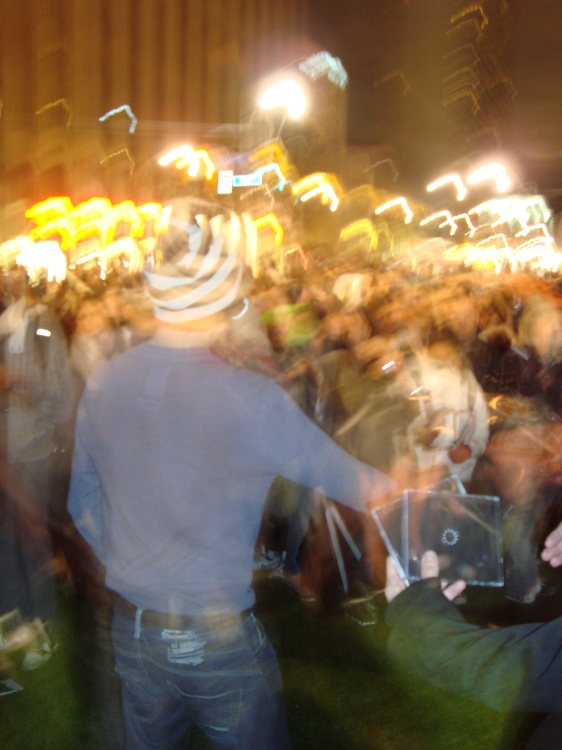 Although exposure to chiptunes has no doubt increased with the success of acts like Anamanaguchi, 8-Bit Weapon and Toronto’s own Oxvylu, the music is still very much an underground reality, as made clear by some onlookers who were vocally fascinated that people could make music from video games.  But the craft deservedly has its followers as well.  Others in the crowd that circled the performers were able to identify the games from which some of the sampled audio was derived.  Best of all, both veteran fans and newcomers found cause to dance, the result of infectious electronic grooves provided by the performers and (probably) not to stave off the chilly fall temperature.

At one point, a temporary loss of power interrupted an early kinetic performance, the sudden silence causing the crowd to share an audible “awww.”  The collective yearning for more was satisfied a few short moments later with the unforgettable chime that greets players when turning on a classic game boy.

“God, I love that sound” said one voice in the crowd.

It’s been years since I last heard it, and I share the same affection.

Unfortunately, due to other commitments, my time with the chiptuners was brief – I caught a high energy performance by DJ Eastern Blok and a more sombre performance with vocals by Arisuki (Alice Stancu) before having to move on. However, by all accounts, what I missed was just as engaging: the crowds grew bigger as more acts pounded away at portable games machines – a special feat for “guerrilla” performers not officially part of the Nuit Blanche program. 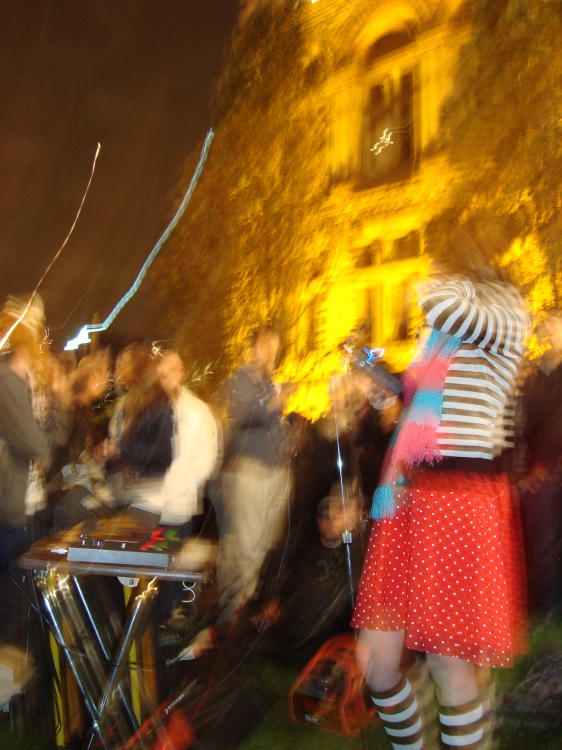 Whereas the chiptunes artists were unofficial, the other gaming event I attended was a sanctioned exhibit set up in the atrium area of the Tiff Bell Lightbox on King street.  Arcadian Renaissance featured indie games developed by members of Toronto’s Hand Eye Society playable within refurbished, 1980s-era arcade cabinets.

Being an “official” part of Nuit Blanche means more exposure (not to mention an indoor venue on what became a cold night), great news for the talented Hand Eye members.  Among the six games included were Spooky Squid’s frantic Cephalopods: Co-Op Cottage Defence, the charmingly gross Gesundheit! by Matt Hammill and (my personal favourite) Spyeart’s one-button flying game Silent Skies.

The latter two games I’ve had the pleasure of playing before, and experiencing them in the context of an arcade unit was different and enjoyable, although not the call back to an authentic arcade experience the Nuit Blanche program was perhaps over selling.  Before the event, CultureGET’s Lori Dance noted that the program’s listing, which aimed to recall “the lost feeling of what it felt like to play games in public” in “darkened arcades,” might be hard to pull off in a gallery setting.  I can confirm such an aim was made a bit awkward by the well-lit, sanitized design of the Lightbox atrium, complete with gallery-style retractable tape barriers and ushers to manage access to the machines.

This isn’t, of course, a criticism of the exhibit or the cabinets – they were fantastic.  Again, playing games on a stand-up cabinet does change the experience: Metanet’s N, a game I’ve mostly enjoyed as a solo experience on PC and Nintendo DS, certainly took on new qualities with a co-op partner on an arcade machine.  However, using it to recall the lost feelings of forgone arcade culture is easier said than done.  For some of us, that would include reproducing the smokey turmoil of having perspiring hands slip off the joystick as you hammer away at the sticking buttons of the Capcom’s 1943 game, jedi-focused by the anxiety of being on your last quarter…  On second thought, maybe not the best memories to evoke. 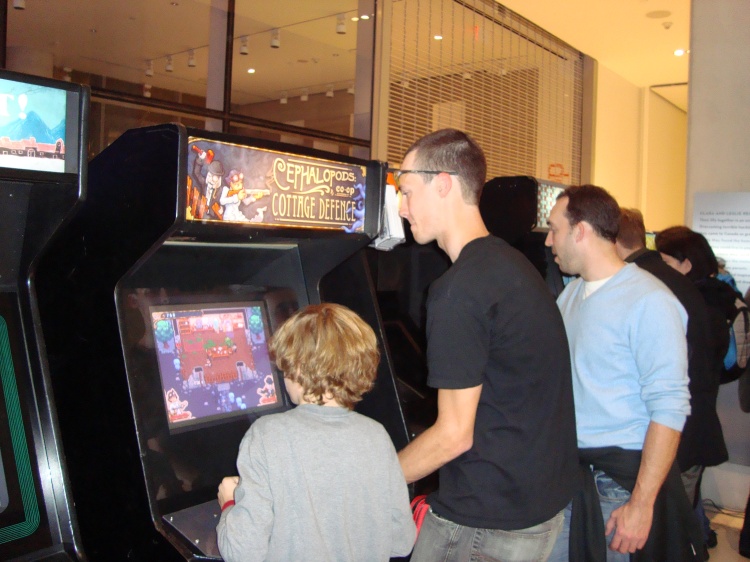 Blending nostalgia with the new, along with a nod to a history of lost practices, is admirable for such events, especially since the arcade spaces that hosted such practices are few and far between these days.  However, the Arcadian Renaissance was more than what was sold in Nuit Blanche promo copy.  It was a celebration of Toronto’s indie games presented in an interesting way, yes, but also a public start to something that will bring exposure to the talented game developers involved at future shows and events.

The Hand Eye Society’s Jim Munroe, curator and producer of the exhibit, told me they plan to convert some of single game machines to play multiple games and tour them around Toronto much like their existing Torontron unit.

Beyond this, the exhibit was also a celebration of play – the root of why gaming in all its forms instantly and continuously intrigues us.  One of the highlights of the Arcadian Renaissance was a midnight tournament featuring Nidhogg, a new game by New York indie developer Messhof.

It didn’t take long for the Nidhogg tournament, projected on the wall for the many Nuit Blanchers in the Lightbox to see, to electrify the growing crowd.  Such a game is as much fun to watch as it is to play, much to the chagrin of the obsessive building staff member directing everyone there to “watch the video games” out of the building’s thoroughfares.

As the tournament projected on the wall advanced, it did so alongside this related but physical incarnation of the same gameplay mechanics on display: The back and forth action of Nidhogg was accompanied by the back and forth competition between the Arcadian Renaissance audience and the Lightbox staffer trying to keep the laneways clear.  Nidhogg’s virtual conflict, unfortunately for the staffer, was more real for most onlookers. For the staffer, it was his battle to lose, his only weapon being vocal persuasion.  At least the characters in Nidhogg had swords…

Overall, it was great to see game-related representation at Nuit Blanche, something I suspect we’ll see more of in the future.  In particular, it was also nice that both events celebrated not only playing games but also playing with them.  Creatively experimenting with games and the hardware that makes them possible, as well as creatively experimenting with the individual ways we engage with them, make up practices that are as culturally significant as the games themselves.

Visit the Hand Eye Society for information about where to play Arcade Renaissance games in and around Toronto.  They have also posted this video about the event.  Finally, check out Rock Paper Shotgun’s recent impressions of Nidhogg.

« IN|10 Feature: Speaking with EEDAR’s Jesse Divnich about Business, Culture and Canada
Exserpico 1: A Master’s Thesis About ‘The Sims’ »

One thought on “Nuit Blanche 2010: Chiptunes and an Arcade Renaissance”