This tag is associated with 2 posts

From the Halls of Gamercamp 2010: An Impromptu, All-Star Video Podcast 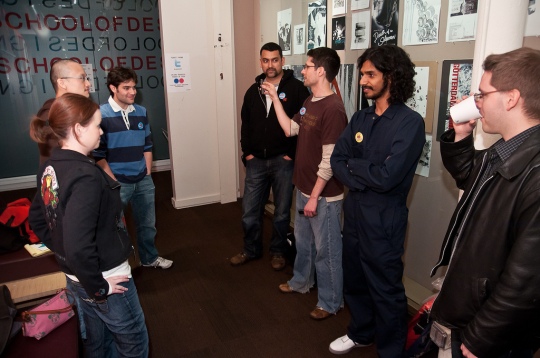 Since this recording was rather spur of the moment, it’s a nice mix of playful irreverance and insightful, in-the-moment commentary about this year’s Gamercamp.  Indeed, we share our thoughts on everything from Mathew Kumar’s pointed Gamercamp keynote which furiously critiqued the state of the gaming press to the corporate evils of those who manufacture Lucky Charms cereal.  Residents of Moose Jaw, SK should observe the following with several grains of salt.

Above photo courtesy of Ryan Couldrey.  Check out more of Ryan’s Gamercamp photos on Flickr.

Ninja on the Playground: A Conversation with Shaun Hatton

Shaun Hatton is a cultural reciprocator: both the product of and contributor to video game culture.  A life-long player, Shaun is a co-founder of Canadian games blog Toronto Thumbs and a current host and producer for Greedy Productions’ Electric Playground.  Outside of these endeavours, he’s also a musician with Toronto band Cobra, spinner of records as DJ Finish Him and reluctant computer game coder.  Above all, he’s a passionate proponent of the best that pop culture has to offer, as well as an outspoken critic of its downsides.

Hatton was, however, not an easy person for me to interview in a conventional manner.  We are both prone to tangents, prone to meandering thoughts that reflect our ardent perspectives, opinions and judgments about games and gaming.  As such, despite not knowing him before this meeting, my time with Hatton unfolded more like a conversation with a friend than a conventional interrogation.  This is definitely not a criticism, but it does produce more topical twists and turns than my usual interviews.

Here Hatton and I playfully zigzag through a discussion about video games as culture and tools for identity formation, the state of Canadian games media and how to implement Canadian content into game narratives, all the while working in mention of Centipede, Phantasy Star and deer electrocution.  Enjoy!